Recently, Martin dropped off two of his prized watches, a Zenith El Primero and this fella. The Zenith needed a lot of work. This JLC just
needed a full service and polishing. Tracking down mainsprings, however, was not that easy. Anyway, let’s get started 🙂

As you will see later in the pictures and storyline, you’ll notice that this movement contains two mainsprings, which were not easy to find…………at all. Anyway, while researching, I did find that this movement is based on the F. Piguet 1185. Which was extremely handy, as I have never serviced this particular movement before, so, having some sort of technical document was an added bonus.

As you see in the pictures, the crown and two pushers have a safety switch. Turn the red inner pushers can either allow you to use the pushers and crown, or, turn them the other way, and it locks it in place. Meaning, it is much more water resistant. Very nice feature 🙂
And, the hour chronograph counter has a disc instead of hand / needle turning.

And a couple pictures of the buckle and deployment clasp that I will be polishing later.

With the case back removed, time to also remove the gasket, case back retainer ring and oscillating weight.

Now, that’s a crown. Double gasket, thick and well made.

This JLC is an extremely well thought out and sturdy watch. They not only had a retainer ring, but, they also had a movement ring underneath it. Sort of redundant movement ring.

With the movement out of the case, it is time to remove the hands and dial from the movement.

There’s that chronograph hour counter wheel I mentioned above

Not the greatest readings, that’s for sure. Let’s see if I can improve on that.

Time to turn the movement over and get my hands dirty. Wait a second here, did someone just replace this movement with the other Seiko 6139A that I am concurrently working? Both of them use a pawl lever ratchet and transmission wheel. Very interesting.

Just a quick pic without the pawl lever and transmission wheel before turning the movement over to the dial side.

All that is left, is the keyless works, which I prefer to leave almost to the end. By the way, it’s called keyless works because back in the day, you needed a key to wind the watch. Hence, “Keyless” 🙂

Turning the movement over again, it is time to start removing the bridge side. First, I remove the three quarter plate to reveal this very gorgeous chronograph.

Next to be removed is the hour counting wheel and bridge.

Next to be removed is the clutch lever and chronograph column wheel.

Again, time to turn the movement over and remove the rest of the keyless works.

One more time, turn the movement over and remove the intermediate wheels, ratchet wheel and click spring. Followed by the pallets and pallet bridge.

Next to be removed is the train wheel bridge revealing the escape wheel and third wheel.

We’re getting there. Next, I remove the barrel bridge revealing the two mainspring barrels, center and second wheel.

Here’s a few pictures of the two different mainspring barrels.

This setting lever reminds me of a newer quartz ETA style.

With all the parts cleaned in my watch cleaning machine, it’s time to organize everything and get started putting it all back together.

I like to always start off the same way, no matter which watch I’m working on. And, that means, if it’s an automatic, I lubricate the barrel walls with P125 breaking grease, followed by treating both the escape wheel and pallet teeth with epilame and lastly if there is any reversing gears, to treat them with Lubeta treatment.

Personally, I like to clean all the rubie holes afterwards with some pithwood. I clean the mainplate and all bridges rubies.

And, time to start putting it all together.
I start off with the dial side and install the keyless works.

Then, I turn the movement over and start installing the train wheels and bridges.

Followed by the pallets and it’s bridge

Next are the ratchet and intermediate wheels followed by the chronograph column wheel.

That’s a much better amplitude and the beat error is also much better. The amplitude, of course will get better as the watch runs for awhile. The epilame treatment will eventually wear off and in doing so will raise the amplitude.

Then, time to start putting together the chronograph mechanism.

Then, turn the movement over one more time and finish up the keyless, motion works and put that pretty perlage bridge back on. Such a great looking movement.

Again, turn the movement over, and put on the chronograph bridge

Once again, I turn the movement over and install the chronograph hour disc followed by reinstalling the dial and hands. 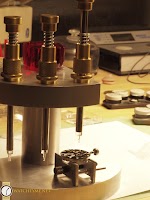 Now that the movement is done and ready for the races. It’s time to put all my attention to the case.
I’ve seen worse, so, it won’t be that hard to get it shiny again. Here’s a few before pictures

After polishing, I put the movement back in it’s movement holder. Such a well thought out holder

And now, for the grand finale, the polished case

I hope you enjoyed my latest project. This is a great looking watch, but also a great watch to work on.

Examples of my work

On this page, you can view some of the recent, as well as previous watches I have worked on. It's impossible to list every watch I have repaired, however, if you would like your watch to appear on this page, please don't hesitate to ask.